A small quasi-idle relaxing game about a Cat and his Human.  The Cat will not ever have to leave its cosy house (unlike its Human), rather mostly sleep for the whole day and see dreams about the stuff its pet primate is occupied with. Funnily enough, this fellow truly thinks they're in control of their life and are fully capable of fending off by themselves.

What a ridiculous notion.

Obviously, they won't survive for long without your care and help.

Guide them to the right decision before they do something stupid.

Also, in this world, every day (or night) only takes 10 seconds, as for cats, the time is relative and flies by anyway. Do not worry, it will be plenty of time to decide where the Cat should spend his day, so no rush shall be required.

While the interpretation of "Every 10 seconds" is pretty straightforward and obvious - the whole game is structured in 10-second loops. However, there are also more intricate theme interpretations inbound.

I've felt like with this Theme, a lot of games will be about doing things quickly, within a limited time, etc. and realised that would be kind of stressful. So, why not go for an opposite route instead?

Your role as a Player is to choose the sleeping place for the Cat (be it the Bed, the Food Bowl, or the Chest) to affect human behaviour and hopefully get him to live on through the next day. Don't worry though, it's not like you can't get more humans if you need to.

While there is no big epic goal there, the game will congratulate you if you find out everything there is to see. Make the Cat happy ^-^

Hint: earn coins and sleep on the big chest in the middle of the room to get your Human to buy something nice for the house ;)

Use the Mouse to control where the Cat should sleep (and press any other key at all when prompted for restart).

While you can jump around and sleep anywhere generally, it's where you sleep _at the beginning of each day_ is what matters for your Human the most. The following night Cat shall see a dream of what did Human do last day, provided that the Cat is sleeping, of course.

It was a blast to use those during the past three days, and I wouldn't be able to make it all by myself without them. Also, my heartfelt thanks to one particular person that helped me test the game on the last day <3

Always at your service,

This game makes me feel a lot better about how long it takes me to get out of bed and do something.

I have no Idea what's happening, nor how to figure it out

Fair enough, thanks for the feedback!
I hoped visual clues and cat's dreams would be enough to tell what's going on, but it seems that the game could use some more direct player feedback.

Currently, it's telling you what did human do last day / night, explaining the change in interior and resources (hearts, fish, coins) at the top left. Would you prefer that to happen before the actual change is done, making a prediction of sorts?

I just don't understand how those icons correlate to how well I'm doing, or what each thing to click on would change

Cute pixel graphics. I like the smooth motion of the second hand on the clock. 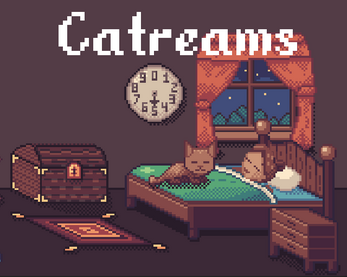